LEISURE: On the ball at Westlands Yeovil with Sheringham and Merson 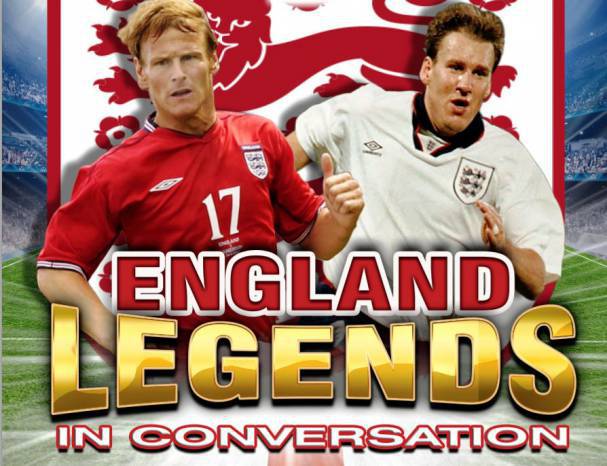 TWO former England international footballers will be at the Westlands Entertainment Venue in Yeovil next week to talk about their careers in football and explain what it is like to play at the top level in the beautiful game.

The England Legends date at Westlands is set for Monday (March 12, 2018) at 7.30pm and will feature Teddy Sheringham and Paul Merson who chalked up 72 caps for their country between them.

They will be joined by host for the night Perry Groves, himself a former Arsenal footballer, and team-mate of Merson.

Sheringham, 51, had a distinguished playing career at club level with the likes of Millwall, Tottenham Hotspur and Manchester United and chalked up 755 appearances and 288 goals. He also managed 51 caps for England from 1993 to 2002 and scored 11 goals.

Merson, 49, enjoyed great success at Arsenal where he made more than 300 appearances from 1985-97 although he went on to continue his career at Middlesbrough, Aston Villa, Portsmouth and Walsall. He made 21 appearances for England between 1991 and 1998.

The will discuss and talk international games, World Cup qualifiers, dressing room/training ground stories, managers, fall outs and everything you wanted to know about playing at international and club level in football.

There will also be a chance to put your questions across to the lads on the night and to ask that question that you have always wanted to ask a pro footballer.

LEISURE: CLOKS are doing the Charleston!

LEISURE: Earth Hour is hailed a success in Chard

LEISURE: Science for the Gardener book signing at Chard Bookshop

LEISURE: On the ball at Westlands Yeovil with Sheringham and Merson

LEISURE: This year’s panto fun comes to an end with TAPS

LEISURE: Good luck to TAPS with Red and the Wolf